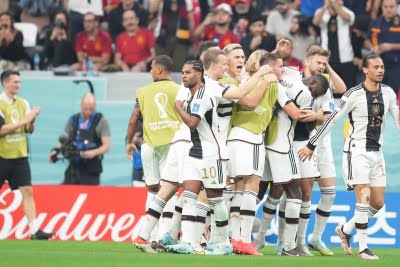 <br>The 29-year-old’s close range strike gave the Germans the first point of the competition having lost their first match to Japan 2-1.

Fuellkrug’s strike cancelled out the 62nd minute strike by Spanish substitute Alvaro Morata, who beat his marker and flicked the ball in at the near post past goalkeeper Manuel Neuer following a low cross from Jordi Alba to give Spain the lead.

The one-all draw has left the group still wide open with Spain needing just a point against Japan to qualify for the knockouts. A win will guarantee them top spot. Germany stay bottom for now, but they can jump to second and qualify for the next phase if they beat Costa Rica and Japan lose to Spain. However, it gets a little bit trickier for Germany if Spain and Japan draw. If Japan draw it would come down to goal difference or goals scored by Germany and Japan.

This is the first time Germany have failed to win their first two group stage matches at a single World Cup but they still have hopes of qualifying for the knockout stage of the competition.