I am just pleased to be back in the red-ball set-up again: Anrich Nortje 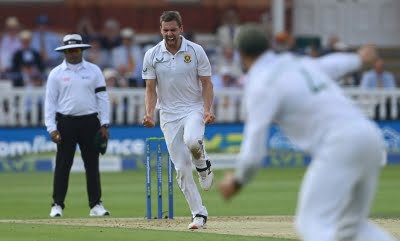 London, Aug 20 (IANS) South Africa’s tearaway pacer Anrich Nortje on Saturday said he was just delighted to be back in Test cricket action again after helping the Proteas secure a sensational first Test victory by an innings and 12 runs against England that came inside three days at the Lord’s.

Nortje was a part of the Proteas pace attack that produced one of their most emphatic bowling displays in recent memory to take a 1-0 lead in three-match series at the ‘Home of Cricket’. He ended with a match haul of 6-100 (3-63 and 3-47) and shared 13 wickets with Player of the Match, Kagiso Rabada (5-52 and 2-27).

But it was Nortje who quickened South Africa’s march to victory by taking out Jonny Bairstow, Alex Lees and Ben Foakes with all catches taken by wicketkeeper Kyle Verreynne in the space of 10 fiery deliveries.

The match at the Lord’s was the first game in the longest format for Nortje in 14 months after back and hip injuries hampered him over the past year, forcing him to miss home Tests against India and Bangladesh apart from away Tests against New Zealand.

“KG (Rabada) did unbelievably well and well done to everyone for that. The guys have shown what they can do and everyone covers a different aspect in their own department and that’s really good, but for me, I’m just pleased to be back in the red-ball set-up again,” said Nortje after the match ended.

It was a proficient all-round bowling performance by the visitors, who bundled England out for scores of 165 and 149 in a mere 82.4 overs. The result ended a four-match winning streak for the hosts, who will now be expected to bounce back strongly in the second Test at Old Trafford, Manchester, starting on August 25.

“We haven’t paid too much attention to what they want to do, we’re focused on ourselves. We’ll have to start from scratch for the next game and find the areas where we can improve.”

“I do think there are periods and areas and short stages where we lost a bit of momentum. So we’re not looking too much at them, we want to control what we can. Like they always say, control the controllable and not look too far ahead, just try and execute what we want to,” added Nortje.

Friday’s loss was only England’s fourth ever innings defeat at the Lord’s, the Proteas now being responsible for two of those thumping wins including the last one that came by Graeme Smith-led South Africa side in 2003. The win has also propelled South Africa to be currently seated at the top of the ICC World Test Championship table.

Global device shipments to decline 4% in 2023, PCs to be worst hit

ILT20: My job is to bring the best out of players, says MI Emirates head coach Shane Bond

We must strive to bring startups' ownership back to country: Eco Survey

Samsung not to cut investment despite significant profit drop

The next two months are going to be an uphill journey: Dalima Chhibber

Senior National Volleyball to kickstart on Feb 2 in Guwahati