'I have absolutely nothing to lose': Serena comes up big in US Open win 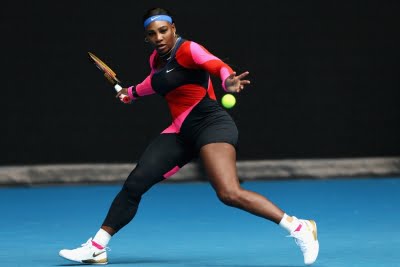 New York, Sep 1 (IANS) After advancing to the US Open’s second round, Serena Williams was asked if her opening victory had answered any questions she might have had about her ability to compete at the age of nearly 41.

“I don’t think I had any questions,” she said.

Williams defeated World No.2 Anett Kontaveit 7-6(4), 2-6, 6-2 on Wednesday before another raucous, rollicking record crowd at Arthur Ashe Stadium. Again facing the last singles match of her glorious career, she moved better and played freer than she has in recent outings.

For the second straight match, Williams’ opponent seemed more unnerved by the momentous circumstances, particularly in critical moments, than she did. After the high emotions of the opening night spectacle, she was more composed and consistent against a far better player ranked 78 spots higher.

“It’s no rush here. I am loving this crowd. I’m a pretty good player. This is what I do. I love a challenge, and I’m rising to the challenge.”

And now, the expectations become greater. Serena will be a significant favorite against Ajla Tomljanovic in Friday’s third round. And with a reasonably favorable draw, people will be asking in earnest if she can actually win this thing.

“I’m just pleased I showed up because the last few tournaments I didn’t show up,” Williams said. “But I’ve been practicing really well and I’m pleased that I’m finally seeing my practice come into my matches, so that’s nice.”

With another record crowd of 29,959 — including Tiger Woods and sister Venus in her player box — emphatically behind her, Serena won the first-set tiebreak with two unreturnable serves, the second an ace outside. But, clearly, the effort left her drained. Kontaveit ran away with the second set, winning six of eight games versus the six-time US Open champion.

Williams scored the first big blow of the third set, breaking Kontaveit’s serve when a forehand from the 26-year-old Estonian soared long. After winning the first three points of the third game, Williams seemed positioned to take a 3-0 lead but Kontaveit showed remarkable poise and converted her second break point.

Naturally, Williams broke right back to take a 3-1 lead. This time she backed it up with a tidy service game. And the next time, she saved a break point to take a 5-2 lead, bringing out the double fist pump.

When Williams’ backhand winner sailed inside the line, it was like 1999 — when she won her first major here at the US Open as a 17-year-old — all over again.

“Honestly, I never get to play like this since ’98 really. Literally, I’ve had an X on my back since ’99. It’s kind of fun. I really enjoy just coming out and enjoying it. It’s been a long time since I’ve been able to do that.”

Remarkably, Williams now has a 75-2 record in second round at Slams with her only losses coming to sister Venus at 1998 Australian Open and Garbine Muguruza at 2014 Roland Garros. She still has never lost in the first two rounds of the US Open.

“I think she played really well,” Kontaveit said. “I mean, I thought I didn’t play a bad match at all. She definitely raised her level in the third set. She played amazing.”

Twitter
Flip
Koo
Previous article
Pat Cummins returns; Tim David, Mitchell Swepson included in Australian squad for ICC Men's T20 World Cup
Next article
If we can have a Marvel universe, why not one for our Puranas: Nikhil Siddhartha
This May Also Interest You
News