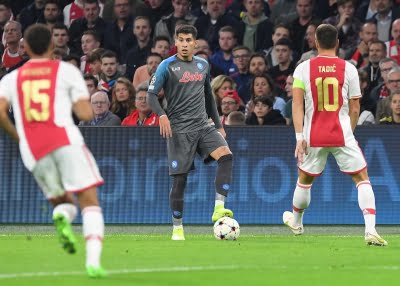 The Hague, Oct 5 (IANS) Ajax has conceded their biggest ever defeat in European football, losing 6-1 against an impressive Napoli on Tuesday night in the Champions League.

With two wins in two matches in Group A, Italian Serie A leaders Napoli arrived in Amsterdam with high expectations and lived up to them. After an early Ajax goal by Mohammed Kudus, Napoli took control and outclassed the home team.

Giacomo Raspadori headed in the equaliser, Giovanni Di Lorenzo headed Napoli in front, and on the stroke of half-time Piotr Zielinski was given a free run by Ajax to make it 3-1 for Napoli, reports Xinhua.

After a mistake by Ajax goalkeeper Remko Pasveer, Raspadori produced his second goal just after half-time and Ajax was broken definitely. Khvicha Kvaratskhelia made it 5-1, Ajax captain Dusan Tadic received his second yellow card and substitute Giovanni Simeone extended the scoring to 6-1. The crossbar even prevented a seventh goal by Tanguy Ndombele.

The biggest home defeat ever in European football for four-time European Cup winners Ajax was a shock, although it was not the first time Luciano Spalletti’s Napoli impressed this season.

Napoli now lead Champions League Group A with nine points, three ahead of Liverpool and six of Ajax. Next week Napoli hosts Ajax and bottom side Rangers plays against Liverpool.

Twitter
Flip
Koo
Previous article
Aishwarya Rajesh-starrer 'Driver Jamuna' to release in November
Next article
IPL auction was not even on my mind; was trying to get a run after successive ducks: Rossouw
This May Also Interest You
Health & Lifestyle