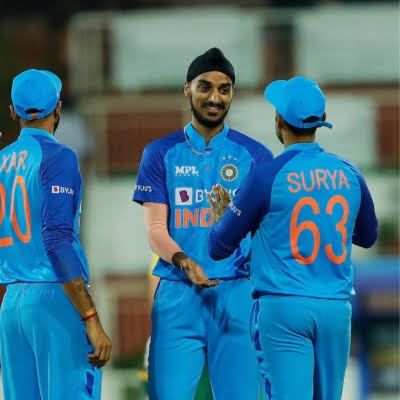 With a good amount of grass cover on the pitch, it meant that fast bowlers would make the ball talk for the entire duration of the game. Suddenly, the environment was more of a Test match than a T20I game as Deepak Chahar and Arshdeep Singh scythed through the top-order to leave South Africa at 9/5 in the space of 15 balls, thereby deciding the outcome of the match long before the actual game was over.

The right-left pace duo, playing after not featuring in the series against Australia, made merry on a pitch tailor-made for them to swing the ball both ways and rattle the South African batters.

Chahar set the tone for the carnage by feeding Temba Bavuma with three outswingers before castling the visiting captain with an inswinger and had Tristan Stubbs caught at third man via extra bounce.

But it was Arshdeep, who broke the back of South Africa’s innings with triple strike in his opening over — Quinton de Kock chopped one swinging away from him to his stumps, Rilee Rossouw was sucked into driving away from the body to give a healthy nick behind and David Miller was clean bowled by a beautiful inswinger.

Though conditions like Wednesday’s match will be very rarely found in Australia where the T20 World Cup will happen, India will be delighted with Arshdeep’s performance with the new ball with less than a month now left for the showpiece event.

For the young left-arm pacer, who has been doing all things right since making his international debut in July, it is a good chance for him to push his case for a slot in India’s playing eleven for the tournament opener against Pakistan at the MCG on October 23.

Arshdeep’s new-ball burst comes at a time when Bhuvneshwar Kumar has been given a break after a gruelling schedule of playing T20Is this year apart from unimpressive returns in the death overs and Harshal Patel is still trying to gain rhythm after comeback from rib injury this month.

Though Arshdeep has shown the smarts of being India’s best death overs bowler this year, as seen from an economy rate of 7.38 in this phase in T20Is, he proved on Wednesday that he can be fantastic with the new ball too. The young left-arm pacer first got an India call-up based on his abilities to bowl yorkers and keep himself calm in the death overs.

"In the first over DC bhai (Deepak Chahar) set the tone and we knew there was plenty of help from the surface. The plan was to keep it simple and bowl in the right areas. I enjoyed (David) Miller’s wicket as I thought he was expecting an outswinger but I bowled an inswinger instead (to get him out for duck)," said Arshdeep after the match ended.

Wednesday’s match at Thiruvananthapuram showed that he can proficiently swing the ball away from the right-hander and also cause discomfort with his inswingers too. In an Indian line-up, where flexibility and adaptability have been the keywords, Arshdeep’s new-ball performance augurs well for the side in their quest to win the silverware.

Twitter
Flip
Koo
Previous article
Shubman Gill is more than capable of holding his own in white-ball cricket: Rohan Gavaskar
Next article
Won't 'mankad' a player unless I am really angry with someone: Moeen Ali
This May Also Interest You
Health & Lifestyle