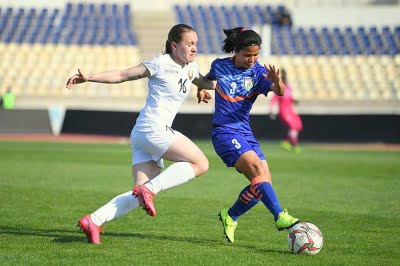 New Delhi, April 9 (IANS) The Indian women’s football team’s campaign in Uzbekistan came to an end with a 1-2 defeat to Belarus in the second friendly match in Tashkent.

Maymol Rocky’s India had earlier lost the opening tie of the two-match friendly series to a much higher-ranked Uzbekistan 0-1 in extremely cold and windy conditions on April 5.

After a barren first half when the Indian team defended doggedly, Belarus, ranked three spots below India in world rankings, took the lead through a Shuppo Nastassia’s penalty, before Pilipenka Hanna doubled the lead. For the visitors, Sangita Basfore, skipper during the tour of Turkey in February this year, pulled one back in added time.

India started off with a high tempo and came close to taking the lead against the 56th-ranked Belarus in the third minute when Soumya Guguloth’s powerful shot from outside the box struck the cross-bar. Striker Pyari Xaxa did manage to nod the ball on the rebound, but her effort looped over the goal.

India’s livewire, right fullback Anju Tamang, made several forays into the rival half and fell back in defence as per the team’s requirement and was responsible for several turnovers, which helped the visitors regroup and launch attacks in the first half.

Belarus were awarded a penalty after one of their strikers was adjudged to have been fouled inside the Indian box. Shuppo Nastassia slotted the ball to the left of goalkeeper Aditi Chauhan, who anticipated correctly but the ball was just too far beyond her reach.

Belarus added a second 10 minutes later, when Pilipenka Hanna was played through into the Indian penalty box, and she squeezed her shot between the keeper and the near post; as the ball hit the upright and bundled in.

A determined India, though, didn’t give up. Skipper Indumathi found Manisha on the left with a piercing through ball and latter pulled the trigger after sprinting into the Belarus box, but her effort was saved.

Basfore got one back late in added time, slotting home from 30 yards out. Though the Belarus goalkeeper got her glove to the ball, the shot had too much power to sail into the goal.