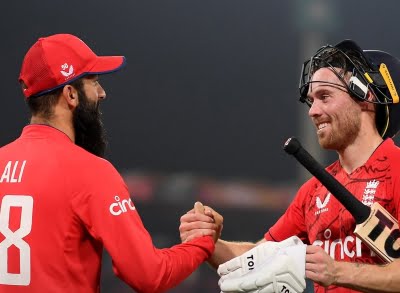 Lahore, Oct 1 (IANS) England stand-in skipper for the T20I series against Pakistan Moeen Ali raised hope that Jos Buttler could lead the side in the seventh and final T20I against Pakistan on Sunday, saying the regular captain was “feeling good” and “training a bit more”.

Buttler has not played in any of the six T20Is in both the Karachi and Lahore legs of the series so far as he is nursing a calf injury and the team management doesn’t want to hurry his comeback, given that the ICC T20 World Cup begins in a fortnight in Australia.

Following England’s massive eight-wicket win against Pakistan, which helped the visitors level the series 3-3 on Friday night, Moeen said, the team management will take a call whether to risk Buttler for the last game — effectively the series decider here on Sunday — or not.

He’s (Buttler) feeling good, been training a bit more. Whether or not we risk him for one game, we’ll see,” said Moeen after the match in which opener Phil Salt cracked an unbeaten 88 as England finished the chase of 170 with 33 balls to spare.

Moeen also said there is no way a side will not succeed if it sticks to the process and the batters play proper cricketing shots.

“Very happy (with the win), thought the way we batted in particular was outstanding. Shows if you stick to the process, you don’t have to slog you can play proper shots. And I thought the seamers were outstanding. If you don’t lose wickets early on, you can keep going. Good base, good shots, really impressive performance. Another good game, I hope, it’s been a brilliant series. We feel we’ve learned a lot as a group,” said Moeen.

Player of the Match, Salt, said it was perhaps his best T20I knocks, adding that it felt all the more satisfying as he finally got a good score after picking out fielders earlier in the series despite playing well.

“Definitely (the best T20I knock); nice to do it with the series in the balance. Always a challenge at the top when you feel you’re playing well but picking out fielders and finding ways to get out. Pleased with the backing from the management about how they want me to play. You need competition, the best sides have that. Everyone’s trying to put their best foot forward and show the coaches how good they are.”