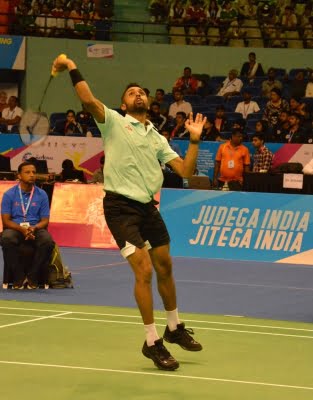 Surat, Oct 1 (IANS) Badminton star H.S Prannoy marked his return to court after a month’s break with a 21-11, 21-9 demolition of Orijit Chaliha to star in Kerala’s 3-1 victory over Assam in the National Games Mixed Team quarterfinals here on Saturday.

“It is a nice feeling to be back on the court. I last played in the first week of September in Japan Open. It was a long break for me after some good victories this year,” Prannoy said as he took stock of his 26-minute victory. “I was not moving as well as I wanted to, but I have got back to training. And, playing a match after a long time is always tough.”

Prannoy, who married his long-time girlfriend Swetha Thomas recently, said the match against Orijit Chaliha was not tough. “But going deeper into the tournament, I will be getting tougher matches,” said the India star who has replaced Tokyo Olympic Games champion Viktor Axelsen (Denmark) at the top of the latest men’s singles BWF World Tour 2022 Ranking.

He is leading with 58,090 points, having participated in 13 tournaments on the BWF World Tour this year.

Prannoy has been in good form since helping India win their maiden Thomas Cup title in May this year. His best came when he made it to the final of the Swiss Open, a BWF Super 300 event. He also had two semifinal appearances in the Malaysia Masters and Indonesia Open.

“My focus would be the World Tour Finals. There are quite a few tournaments before that. I hope to produce winning results in those. I have to be consistent. Of course, I have to be in the top eight to make the grade,” he said. “I would like to get into a good rhythm before the World Tour Finals. I’m happy with my results over the last year and I need to be consistent.”

Although he has the top spot in the World Tour Ranking, his World ranking in men’s singles is 18. “I would like to get into the top 10 and preferably top five as I would get a better draw. I also need to work on my game so that I should go beyond the semifinals. That is my priority now,” he said.

In the day’s other matches, Maharashtra defeated Delhi 3-1 while Gujarat got the better of Uttarakhand 3-2 to reach the semifinals.

Maharashtra will now face top seeds Telangana while the hosts will take on Kerala for a spot in the gold medal match.

For Gujarat, it was a reason for celebrations as they are assured of a first-ever badminton medal in the National Games. “We look forward to the semifinal match against Kerala. But winning the first ever medal is a big achievement for our team,” said Monesh Mashruwala, manager of the Gujarat team.