One among Rohit, Dhawan has to play selfless cricket to post strong runs in power-play: Saba Karim 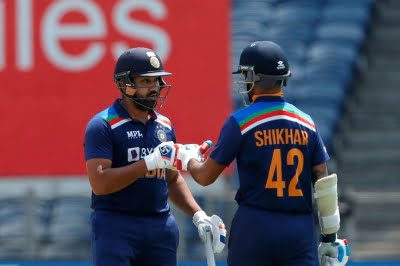 Since 2020, the duo, currently the fourth-most successful pair in ODIs, have batted together for only nine innings, amassing 417 runs at an average of 52.12, including two hundred-plus and as many fifty-plus stands respectively.

But their power-play strike rates have yielded diminishing returns. While Rohit’s strike-rate in this phase of ODIs since 2020 has been 94.3, Dhawan’s strike-rate stands at just 74.1. With India gearing up for ODI World Cup 2023, former wicketkeeper-batter Saba Karim opined either Rohit or Dhawan has to go big in power-play to give the side a great start.

"Between Rohit and Dhawan, one of them has to play selfless cricket and that’s the only way we can put up some strong runs in the powerplay. One should also understand that the second powerplay from overs 11-40 is also crucial since you have five fielders inside the circle."

"That is also a time to exploit some vacant areas in the outfield and that can happen if both openers stick around and continue to play those kinds of shots. It’s a call which Rohit Sharma and Shikhar Dhawan need to figure out," he said in a select media interaction facilitated by Sony Sports Network.

With India not having either Hardik Pandya or Ravindra Jadeja, they could think of elongating their batting order by having pace all-rounder Shardul Thakur and Deepak Chahar in the playing eleven for the first ODI against Bangladesh on Sunday. But Karim doesn’t think so.

"Initially, I expect only one of them (Chahar and Thakur) will play. Because India also need to have three attacking bowlers who help you pick wickets not only with the new ball but also in the middle overs, as that also plays a very crucial role. We hardly picked up wickets in the middle overs against New Zealand so that’s crucial along with having 6-7 attacking bowling options at your disposal if possible."

Bangladesh haven’t played ODIs since their 2-1 loss to Zimbabwe and 3-0 defeat to the West Indies, due to the focus shifting to Men’s T20 World Cup in Australia. Karim remarked that finding flow for Bangladesh in ODIs will not be easy due to lack of game-time in the format, but expected the side to put up a strong show against India.

"It does have a detrimental effect if you haven’t played too many international matches. So, you need to find the right kind of composition, and it is not that easy to do so. But in Bangladesh, I do believe that they have got some exciting players. They also have experienced players and I expect them to do well in their home conditions."

"Someone like a Litton Das is extremely valuable for their side, then you have Taskin Ahmed who can bowl 140-145 clicks. They have a very strong spin combination, led admirably by Shakib Al Hasan and have decent all-rounders in the mix."

"But India is a strong side and are fielding a full-strength side. I do expect India to win this ODI series against Bangladesh. But it’s another opportunity for Bangladesh to do well against a strong side like India."