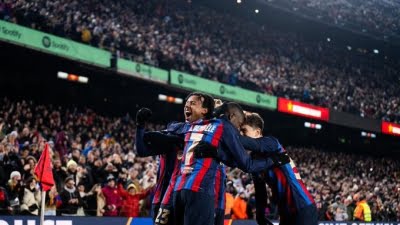 Pamplona, Spain, Jan 26 (IANS) Osasuna qualified for the semifinals of the Copa del Rey with a 2-1 win at home to Sevilla on Wednesday night.

Chimy Avila opened the scoring after a knockdown from substitute Ruben Garcia in the 70th minute of a tight game in which Sevilla controlled the first half, and Osasuna was the better side after the break, reports Xinhua news agency.

However, just when it looked as if the side from Pamplona had booked their place in the last four, Sevilla striker Youssef En-Nesyri forced extra time with a 95th-minute equalizer as he finished Suso’s cross from close range.

Sevilla started extra time strongly, but Osasuna won the game when Jon Moncayola’s ball from the back found Ez Abde and the winger turned Loric Bade before beating Bono with a low shot to send the home fans wild.

Barcelona fielded the side that beat Real Madrid 3-1 in the Spanish Supercup and controlled the first half, although the best chance fell to Real Sociedad striker Takefusa Kubo, who rattled the crossbar with his shot.

Things swung Barca’s way five minutes before halftime when Real Sociedad was reduced to 10 men after Brais Mendez was shown a direct red card for a high challenge on Sergio Busquets.

Ousmane Dembele put Barca ahead seven minutes into the second half when he controlled a long ball from Jules Kounde and surprised visiting goalkeeper Alex Remiro with a powerful shot from a tight angle.

Barca suffered what is becoming a habitual dropping off of intensity after the break and Alexander Sorloth should have done better than fire over for ‘La Real’ after more good work by Kubo.

Pedri had to leave the pitch with a possible muscle injury for Barca and despite being down to 10 men, Real Sociedad kept on pressing and former Barca youngster Robert Navarro was only denied an equalizing goal in the closing moments by an excellent save from Ter Stegen.