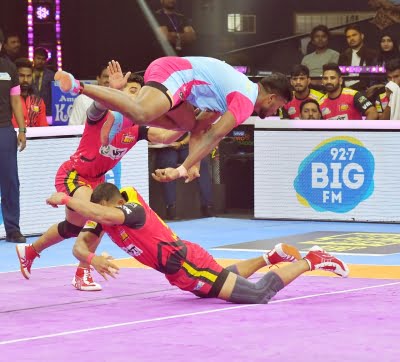 Hyderabad, Nov 30 (IANS) Arjun Deshwal and V Ajith were on fire as the Jaipur Pink Panthers swatted away the challenge from the Bengaluru Bulls, winning by a scoreline of 45-25, at the Gachibowli Indoor Stadium on Wednesday.

While Arjun was the star of the show for the Jaipur Pink Panthers, it was Bharat who registered another Super 10 for the Bengaluru Bulls.

For the Bengaluru Bulls, it was Bharat who started off with the first points, while the Jaipur Pink Panthers turned to Rahul Chaudhari and Sahul Kumar for first points in a slow-paced start to the game. The Jaipur Pink Panthers’ defence was in fine form, setting the tone of the contest, thwarting the Bengaluru Bulls’ raids with some incredible tackles.

Bharat needed the supporting cast to step up in the second half for the Bengaluru Bulls, but it was Arjun and co who were keeping the Jaipur Pink Panthers in the box seat. Bharat was soldiering on for his side, but the task on had continued to get tougher as the opponents maintained their firm grip on the contest. Arjun had notched up his Super 10 while Ankush and Reza Mirbagheri were leading the charge in defence.