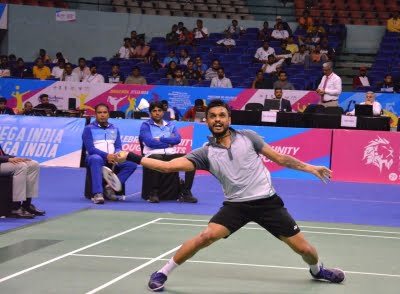 In the Men’s semifinals, played at the PDDU Indoor Stadium here on Wednesday, Sai Praneeth downed M Raghu of Karnataka 21-12, 21-19 while Mithun was clearly the dominant player in his 21-9, 21-11 victory over Gujarat’s Aryamann Tandon.

“I felt happy with the way I played my strokes. They came off nicely,” Sai Praneeth said, after his victory.

Aryamann Tandon, who became the first Gujarat badminton player to win a National Games medal, could not find a way past Mithun on Wednesday.

“I had no answers to his shots,” admitted Aryamann, who has trained with Mithun at the Prakash Padukone Academy in the past. “I knew his game. I was confident and I had decided to play an attacking game from the start. I had prepared for this match. But nothing worked.”

In the Women’s final, Malvika Bansod was once again pushed to the brink, this time by Aditi Bhatt of Uttarakhand. However, the top seed banked on her experience to put behind her second game reversal to win 21-10, 19-21, 21-13.

Aakarshi Kashyap had a far easier outing as she trounced Karnataka’s Tanya Hemanth 21-9, 21-15.

The other big players involved in semifinal action were Ashwini Ponnappa and Sikki Reddy who recently stopped playing women’s doubles together.

“I was little rusty in my game. We were playing for the first time in a big tournament and it took some time to settle down. I made some silly mistakes but Prateek came up with some good smashes. I was impressed with his game. We need these types of matches to become stronger in future tournaments,” said the 33-year-old Ashwini.

The Karnataka pair will take on the Delhi duo of Rohan Kapoor and Kanika Kanwal, who defeated S Sanjith and TR Gowrikrishnan (Kerala) 24-22, 21-18.

Playing for the first time in a big tournament with Gayatri Gopichand, left-handed Sikki had to adjust her game with her partner in Women’s Doubles. “We never played together in a big match. She had never partnered a left-hander either but we jelled nicely,” said Sikki after routing the Delhi pair of Kavya Gupta and Khushi Gupta 21-16, 21-17.

In the final, the Telangana duo will meet Shikha Gautam and Ashwini Bhat (Karnataka), who defeated Kerala’s Mahreen Riza and Arathi Sara Sunil 23-21, 21-11.

The Men’s Doubles final will be between PS Ravikrishna and Shankar Prasad Udaykumar of Karnataka and Hariharan Amsakarunan and Ruban Kumar of Tamil Nadu.

Twitter
Flip
Koo
Previous article
Astana Open: Djokovic races past Garin, to face Van de Zandschulp in second round
Next article
How a bot makes the lives of Ukraine's refugees a bit easier
This May Also Interest You
Sports