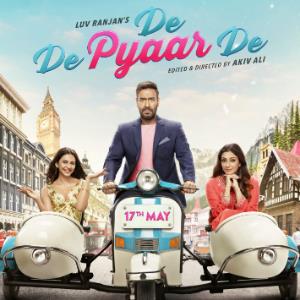 The prominent new release of the week,  Luv Ranjan’s Akiv Ali directed Ajay Devgn, Tabu and Rakul Preet starrer, comic family drama, DE DE PYAAR DE, saw a fair start in the range of 25 percent but expectedly picked up well during the latter shows. The trend is expected to continue during the upcoming weekend and DE DE PYAR DE is on course for a good fate at the box-office as the film carries a reasonably positive word-of-mouth. What must also be kept in mind is that paid previews on Thursday have managed  nearly a crore. The first day appears to be around the 9 crore mark.

Meanwhile,  last week’s major release,  Karan Johar’s Tiger Shroff, Ananya Pandey, Tara Sutaria and Aditya Seal starrer, STUDENT OF THE YEAR 2, could not capitalise on the decent 38 crore weekend and struggled during the weekdays, netting in the 55-56 crore range. Having said that, SOTY 2 has already done enough to be sure of at least an average status. The film though has under-performed in the overseas grossing around £125,000 from UK and $630,000 from the US (both totals are approx.), during the opening week.

Concluding with the blockbuster Hollywood venture, AVENGERS : ENDGAME (all versions), the film added another 20 crore thus netting a huge 356 crore in three weeks from India.