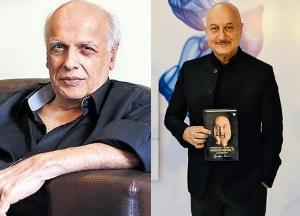 Filmmaker Mahesh Bhatt, who launched actor Anupam Kher in the Hindi film industry with his 1984 film, "Saaransh", says that whenever the 64-year-old achieves something, his heart is filled with pride, despite their different political ideologies.

Kher Kher is a follower of right-wing politics and a huge supporter of Prime Minister Narendra Modi, while Mahesh Bhatt's affinity for a liberal and secular political ideology is only too well known. The subject of their ideological disparity came up at the launch of Anupam Kher's book, "Lessons Life Thought Me Unknowingly", where Bhatt was a guest.

Despite polar opposite ideologies in politics, what keeps them together? Bhatt was asked.

"I am glad this question came up. I would like you to keep wondering about what keeps us together, irrespective of our totally different political ideologies. I remember, before the 2014 general elections, (journalist) Karan Thapar tried to pitch us against each other in a television interview. Back then, he (Anupam Kher) took me on and disagreed with me, but that's what Anupam Kher is," said Bhatt, while interacting with the media at the event.

Bhatt added: "He has the power and the audacity to tear me to bits when he believes in it. And I think that's my success that I did not indebted him in any way. I think that's what free societies and homes are. Love is not dependant on the diverse views that you may have. Why can't we live under that sky where we may disagree with each other vehemently? And why can't we retain the elemental love and affection that is essential for the survival of human race?"

Having given the actor his break in Bollywood, Bhatt said his heart fills with pride when Kher achieves something.

"I have given birth to him. When he flies, my heart fills with pride. When he takes me on and disagrees with me, it is a sign that this is the kind of mind you must inculcate. I have something against a society which reduces everybody into one kind of a being. He has distinct fingerprint and world view. I respect that and I think that is what keeps us together," said Bhatt.

Kher added: "I think Bhatt saab has spoken on my behalf. There is a line in my play that goes, 'If life is the battlefield of Kurukshetra and I am the questioning Arjun, Mahesh Bhatt is my Krishna'. That will never change. Whenever we had arguments owing to our different ideologies, then Bhatt asked me 'the lines which you recite in your plays come from within your heart?' I told him 'I will recite those lines from my heart till my last breath because that has been taught to me and those are my values'."

On work front, Anupam Kher was last seen on the Bollywood screen in the film, "One Day: Justice Delivered". Whereas, Mahesh Bhatt is returning to direction after many years with "Sadak 2", starring Sanjay Dutt, Pooja Bhatt, Alia Bhatt and Aditya Roy Kapur in lead roles.