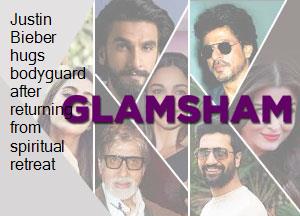 Los Angeles, Nov 9 (IANS) Singer Justin Bieber recently took a break for some time by going on a spontaneous solo visit to Northern California for a spiritual retreat.

He is now back in Los Angeles, and it looks like the Canadian popstar still needs a bit of support. Bieber was recently spotted sharing a comforting hug with his bodyguard here, reports dailymail.co.uk.

The singer looked somber as he stood wrapped in the arms of his bodyguard, as they left his car in a parking structure.

It was unclear what exactly was making the “Baby” hitmaker so unhappy, but his emotional display and recent getaway did come after his ex Selena Gomez released a track about her former lover.

In her new track “Lose you to love me”, Gomez sings: “You promised the world and I fell for it/ I put you first and you adored it/ Set fires to my forest and you let it burn/ Sang off key on my chorus cause it wasn’t yours.”

During his break, he shared a photo that appeared to be from the Sierra Nevadas. He told his millions of followers: “Took a road trip by myself to pray, think reflect. Time to get back to WIFEY.”

“He took some time away from wifey to reflect about the #1 song on Billboard,” one user commented.

Another posted: “He took a trip away of wifey to lowkey stream to lose you to lose me.”

Though the timing of Bieber’s road trip was intriguing, he and his wife Hailey are reportedly set on ignoring Gomez’s song.

“Of course Justin and Hailey have heard Selena’s new song and they are both trying to not give any reaction to her lyrics referencing Justin,” a source told E! News.

“It isn’t ideal for Hailey but she understands the creative process of writing music and that Justin had a past.”

“Justin has completely moved on from that chapter of his life and understands that Selena is allowed to reflect on the past in her own way,” the insider added.

“Justin and Hailey both want Selena to be happy and in a good place and aren’t phased by it.”