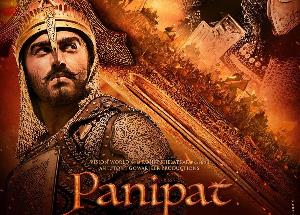 There are additional Marathi lyrics by Guru Thakur. Kunal Ganjawala, Deepanshi Nagar and Padmanabh Gaikwad render the number well. Featuring lead actor Arjun Kapoor, essaying the role of Sadashiv Rao Bhau and Kriti Sanon, it’s a festive celebration song with Arjun as generals and the public gather after a win over the enemy and thank Lord Shiva for giving them the strength to fight against a mighty army.

Next up is ‘Sapna Hai Sach Hai’, a lovely, romantic Ajay-Atul composed number,  rendered by Abhay Jodhpurkar and Shreya Ghoshal with lyrics by Javed Akhtar.

The situational number shows lead actors, Arjun Kapoor and Kriti Sanon, getting married in the traditional Maratha style and commences with them garlanding each other followed by different wadding rituals like the ‘saat pheras’ etc,  watched over by family members, generals, and the courtesans amidst much fanfare.

Although the backdrop is a wedding celebration, yet it’s a romantic song where the dreams come true for the couple.