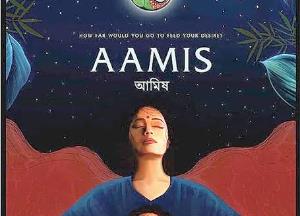 It is in the fitness of things in this bizarre but persuasive exposition on flesh-eating obsessions, that the search for love, or for a ‘meet’, merges into a growing obsession with meat that finally culminates in a horrific crime that is repugnant and in many ways, deeply offensive.

“Aamis” is not what it initially seems to be. A sweet love story set in a strangely stress-free Gauwhati, between a wide-eyes innocent young man Sumon (Arghdeep Baruah) and a slightly older married doctor and mother Nirmali (Lima Das), whose husband is frequently out of town…too frequently , for things to remain as equanimous as they seem.

Writer-director Bhaskar Hazarika is unusually adept at capturing the sounds, sights and smells of workaday existence… the rhythms of normalcy are captured in all their stripped-down fidelity by a camera and sound design that know their way around the characters. Hazarika constructs a case for a budding beautiful, although strictly forbidden romance between the unlikely companions who share a common liking for meat eating-adventures, only too shatter the mood of the temperate and the humdrum with a twist in the tale that is original, jolting and altogether appalling.

What Hazarika does to the romance in Aamis is, in some ways, unpardonably perverse. And yet the sense of doom that swathes the central relationship of this freakish fable is somehow, not an aberration but more an accreditation of the anxieties that swirl just under the placid surface of human relationships waiting to burst open at the first provocation.

This love story about two voracious meat eaters is hard to digest. But it’s also hard not to get sucked into the vortex of the insatiable violence that gathers at the centre of this nerve wracking drama.

The film makes its journey from forbidden courtship to unspeakable crime in a narrative that is not fully convincing but always compelling right till the shocking revolting finale.

This is not an easy film to pull off. Bhaskar Hazarika manages it with timorous but unwavering grace, thanks to his lead pair who furnish an uneasy but convincing graph to their off-kilter characters. Lima Das as a bored wife who discovers a stunning appetite for adventure in her stunningly adventurous appetite, chews on every morsel of her meaty role as though it’s her last. Arghadeep Baruah as Ms Das’ ‘Mann Ka Meat’ remains constantly wide-eyed and innocent even as his actions (which involve self-mutilation) grow unspeakably vile.

These are remarkably accomplished performances in a film that is savagely original. The closest parallel I can think of is Julia Ducourno’s 2017 French film “Raw”.

And in that, no one crossed culinary boundaries for love. [By Subhash K. Jha]

Twitter
Flip
Koo
Previous article
It’s going to get bloody: Ian Somerhalder on his next
Next article
Pagalpanti movie review : A crazy fun ride
This May Also Interest You
Health & Lifestyle

- Advertisement -
- Advertisement -
It is in the fitness of things in this bizarre but persuasive exposition on flesh-eating obsessions, that the search for love, or for a 'meet', merges into a growing obsession with meat that finally culminates in a horrific crime that is repugnant and in...Aamis Movie review: Critics Review, Rating, Cast & Crew