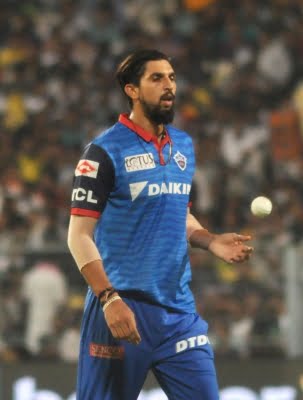 Mumbai, April 10 (IANS) India pace bowler Ishant Sharma, who had recently recovered from the injury he suffered in last year’s IPL to return to India team and play his 100th Test over a month back, suffered an injury again to miss Delhi Capitals (DC)’s first match of the IPL 2021 season.

News coming out of DC camp ahead of Saturday’s game suggested that the lanky fast bowler is carrying a niggle and was forced to sit out.

Delhi Capitals could also not play their South African pace duo Kagiso Rabada and Anrich Nortje, who have just arrived from South Africa and are serving quarantine.

Instead of their four internationally-acclaimed pace bowlers, DC played young Avesh Khan, who has represented India under-19s in the past. He plays for Madhya Pradesh and picked an early wicket, removing CSK’s South African batsman, Faf du Plessis, leg-before wicket.

Khan opened the bowling with Chris Woakes. The English all-rounder also got an early wicket by removing Ruturaj Gaikwad.

Ishant sustained a left internal oblique muscle tear in October, 2020, during the IPL.

He was forced to miss a part of the T20 tournament and also missed India’s tour of Australia. He, however, returned for the home Test series against England and played his 100th Test.