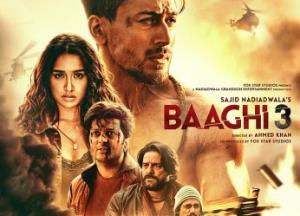 BAAGHI 3 movie review is here. Directed by Ahmed Khan, the movie is a spiritual sequel to BAAGHI (2016) and BAAGHI 2 (2018). Released today – March 06, 2020, BAAGHI 3 stars Tiger Shroff, Riteish Deshmukh and Shraddha Kapoor. Does it fulfills the expectations?. Let’s find out in the movie review of BAAGHI 3.

The Story of BAAGHI 3
Won,t say chori but in a lighthearted manner will call it a sina jori ( pride, stubbornness in a way) from an innocent enthusiastic movie fanatic. Where you find the curd from the 2012 Tamil blockbuster VETTAI (starring Madhavan, Arya) suddenly poured in the the katori ( vessel) of Salman/Varun starrer JUDWAA. There is no logic behind what you just read and the same applies for this action packed mayhem done only to cash on the popularity of the franchise and its lead Tiger Shroff.

So, BAAGHI 3 is about two brothers. Elder brother Vikram (Riteish Deshmukh), a timid individual who hates violence and younger brother Ronnie (Tiger Shroff) a street smart toughie. Ronnie is always there to save his ‘bade bhaiya’ from the goons. One day a dreaded terrorist group from Syria kidnaps Vikram and it’s all up to Ronnie to save his brother. (for the benefit of the makers and diehard fans – I have avoided spoilers – yippe yeah.).

BAAGHI 3 movie review
So, what do you expect from a sequel of BAAGHI – BAAGHI 3 starring the sensation kicking, flying, dancing sensation called Tiger Shroff in lead.

Hard core solid action – yes but lacks the ‘killer’ impact in comparison with its previous franchise.

Dance – yes but only one song.

Anything new extra novel in BAAGHI 3
Riteish Deshmukh as the timid brother but the character graph is uneven and there is no explanation to his behavior so not at all that convincing. Though the actor tries his best.

Anything good apart from Tiger Shroff
A scene during the climax involving Jaideep Ahlawat that made my believe that I am watching a video game rest for a while.

Finally how is Tiger Shroff
Tiger Shroff maintains his reputation as Bollywood’s incredibly acrobatic martial arts talent twined with the charming boyish exuberant appeal a new age true blue Bollywood’s martial arts star. He is majestic but the script, the execution is a major let down a huge disappointment.

Any other notable things
Some performances are notable for example Jackie Shroff as the father, Ankita Lokhande, as Ruchi, Jameel Khoury as Abu Jalal – the main villain, Jaideep Ahlawat as Abu's Henchman and Vijay Varma as Akhtar Lahori.

Final words
BAAGHI 3 shares its shares its DNA from the previous franchise and they where money spinners but this is the weakest bet. Things over here are innocently juvenile in the name of an action packed thriller suited for those who still find pleasure in those chor police, ram leela kind of plays/games we play when we are in our primary schools. The next sequel of BAAGHI will now have to come up with something pretty special if it hopes to fly like Tiger’s flips to kick past this miserable entry.

Twitter
Flip
Koo
Previous article
IIFA 2020 postponed due to coronavirus outbreak
Next article
Will Daniel Craig might return as James Bond?
This May Also Interest You
Fashion n Lifestyle