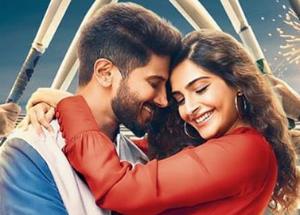 The movie is a light adaptation of Anuja Chauhan’s 2008 best seller of the same name. Does Zoya charms the screen as well?. Let’s find out in the movie review of THE ZOYA FACTOR.

Immediate reactions when the end credit rolls
Love, passion religion all in one. THE ZOYA FACTOR is a feel good heart warmer that is born on belief, grows on faith and lives on loves and dreams. A movie that hugs cricket, kisses Mills & Boons and worships the lady luck is blessed by top notch act by Sonam Kapoor and Dulquer Salmaan.

Memorable moments
Quite a few for example – when Zoya dressed in red waves from the packed stadium, When Dulquer Salmaan talks to a stranger on phone in his flawless Hindi.

The Story of THE ZOYA FACTOR
Based on the novel by the same name by Anuja Chauhan, THE ZOYA FACTOR is adapted for screen by Neha Rakesh Sharma and Pradhuman Singh. It’s the story of a girl Zoya Solanki (Sonam K Ahuja) born on June 25, 1983, the historic day of Indian cricket when the Kapil Dev led Indian cricket team lifted the world cup. Elated father army man Vijayandra Singh Solanki (Sanjay Kapoor) believes that her daughter is the lucky charm for the Indian cricket team. To begin with Zoya so called ‘luck’ benefits his brother Zorawar (Sikandar Kher) also in the army during his childhood when he used to play cricket on streets.

THE ZOYA FACTOR movie review
A blessed reminder of how a feel good romantic comedy can get a spoofy, breezy uplift by gifted performances, THE ZOYA FACTOR is a light hearted witty take on faith, believe, love and cricket. Pradhuman Singh Mall and Neha Sharma’s screenplay with additional screenplay by Anuja Chauhan is feel good charmer, with some unexpected surprise at a couple of times. It’s witty in its approach and doesn’t aim to be the profound adage on its genre.

Now coming to the main point, in 2008 when Anuja Chauhan’s THE ZOYA FACTOR came out, it pumped fresh air into the chick Mills and Boons fairy tales love stories with a rare twist coming from gully of cricket. The novel had a perspective, a precise wicked/mischievous outlook with a sly comment on believe and superstition.

Perhaps the novel’s novel ‘filmy’ quality that amazing marriage of fact & fiction, faith and conviction, dream and reality seemed perfect for a big screen adaptation or a tv series or say a digital series if we see what’s happening around on prime digital platforms.

Director Abhishek Sharma the man who helmed TERE BIN LADEN series, THE SHAUKEENS and PARMANU: THE STORY OF POKHRAN uses smart detailing but the overall sweep is somewhere missing. Post interval it searches for humour and then relies on the audience passion for cricket to act as cover.

Last but not the least; the humourous commentary is another highlight.

Performances are top notch
Sonam K Ahuja charms her way throughout with the role she was born to live again and again. She is just amazing and the best part is that here character gains confidence and her acting starts finding nuances simultaneously.

Dulquer Salmaan is a class part. Most appealing is his fluency in Hindi and the actor is gifted with looks and great sensibility. His controlled, subtle composure is just terrific and he speaks mostly with those smiles and eyes.

Angad Bedi is superb. Sikander Kher is fantastic and has his moments. Sanjay Kapoor is fine. Manu Rishi Chadha is such a gifted talent. Koel Purie is fine. Abhilash Chaudhary as Shivi, Gandharv Dewan as Harry and Sachin Deshpande as Lakhi leave their mark as well.

Shankar-Ehsaan-Loy’s music moves with the flow where ‘Lucky Charm’ tops the list.

Final words
THE ZOYA FACTOR is a charmingly delightful evening, lock your troubles at home and have a nice time with Zoya and the Indian cricket team.