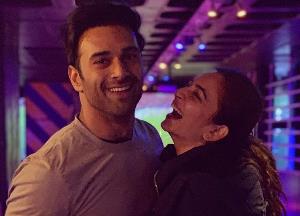 Pulkit Samrat and Kriti Kharbanadas rumoured affair has been fodder for B-Town gossip for a while now.

Co-stars being linked when they sign back-to-back films together is an old publicity trick in Bollywood, but the two stars are not giving away if there is anything serious brewing. For the record, after "Veerey Ki Wedding" last year they are now back together in Anees Bazmee's "Pagalpanti" which will be followed by Bejoy Nambiar's "Taish".

Asked about working with Kriti, Pulkit told IANS: "Working with her is insane. I wouldn't have been able to survive a couple of films if she was not my co-star. Firstly, we share comfort and camaraderie. She has been an earthing wire, balancing me on the set. If I do something wrong, I give a retake if she does not like it. If she smiles at me after a shot, I know it's okay. I look for reassurance from her."

Talking about their chemistry, he added: "I think Kriti and I have great on-screen chemistry, which translates in real life."

Pulkit and Kriti are pairing up as Chandu and Janvi in the action-comedy "Pagalpanti". The actor shared the experience of shooting in Leeds, UK, saying: "The weather did all the pagalpanti when we were shooting in Leeds. It took us 70 days to complete one sequence due to bad weather. We have shot even at minus three degree temperature and in supremely windy weather conditions, where the wind would blow at 40 kilometres an hour. There were days we could not shoot for more than 15 minutes. We would shoot whenever the weather was a little favourable. We were shivering so much that we were unable to speak our dialogues. But we had a lot of fun during the shoot and Anees sir is a really nice person."