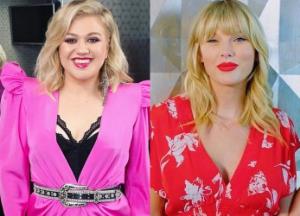 Singer Kelly Clarkson has opened up about encouraging fellow singer Taylor Swift to re-record her songs.

Clarkson sat with host Jimmy Fallon and dished about her suggestion, which she posted to Twitter in July, that Swift re-record her old songs to take back ownership of her masters amid the "Lover" singer's feud with Scooter Braun and Big Machine Records, reports "etonline.com".

Also Read: Taylor Swift wants to be a "Lover"

"We saw each other actually, after I did that," Clarkson shared.

"I wasn't really trying to defend or offend anyone. It was more like, singer Reba (McEntire) told me she did that. That was it. That was all. She wanted to own her masters. And I was like, 'Well if it's that important to you, like find a way'. And she recut all of her music and did it with the same musicians, the same everything. That's where I got the idea."

Clarkson had earlier tweeted to Swift at the time: "Just a thought, you should go in and re-record all the songs that you don't own the masters on exactly how you did them but put brand new art & some kind of incentive so fans will no longer buy the old versions. I'd buy all of the new versions just to prove a point."