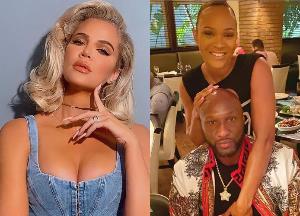 Lamar popped the question to his girlfriend Sabrina Parr earlier this week during a romantic dinner at Prime 112 Restaurant in Miami, Florida after just three months of dating.

The former NBA player took to Instagram earlier this week, where he posted a photo of himself and Sabrina, who was seen sporting a huge oval engagement ring on her finger.

"Introducing my new fiancé," he captioned the post. "Soon to be Mrs. Parr-Odom. She the ONE!!!!"

Khloe recently responded to the news, saying she wants "nothing but the best" for her ex-husband.

Khloe got married to Lamar in 2009 after just one month of dating. Unfortunately, the marriage didn’t last for long, with Khloe filing for divorce in 2013.

Lamar recently opened up on his relationship with Sabrina, saying it was the "most serious and committed" relationship he had ever been in. He also admitted that he was "tired" of being asked about his ex-wives Khloe Kardashian and Lisa Morales – with whom he shares a 21-year-old daughter Destiny and 17-year-old son Lamar Jr.