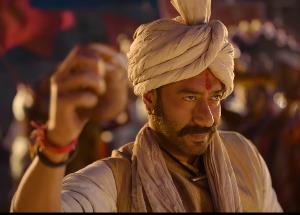 The much-awaited trailer of Ajay Devgn’s Tanhaji The Unsung Warrior releases tomorrow. Recently he released the posters of the character roles played by Saif Ali Khan, Sharad Kelkar, and Kajol.

Ajay Devgn in his acting career did many exciting stunts. He is always famous for his unique action stunts. Earlier he has balanced on two bikes and two horses. This time he is seen doing an epic stunt which leaves you in splits.

The video shows Ajay Devgn is seen breaking a coconut with one hand. This would be a unique action stunt performed by him.

Ajay Devgn will be playing the role of Tanaji Malusare, a military leader in the Maratha Empire. He fought alongside Maratha leader  Shivaji Maharaj in various battles throughout the years.