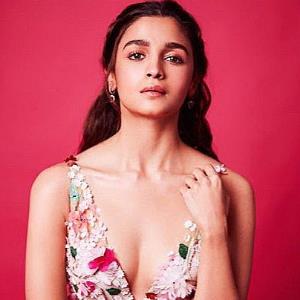 Actress Alia Bhatt, who is playing one of the leading ladies in the upcoming film KALANK, on Friday visited Mumbai's iconic Gaiety theatre for the first time in her life. She was here to launch the film's song "First class". The actress arrived alongside her co-star Varun Dhawan at the theatre, located in Bandra, one of the suburban areas of Mumbai city where thousands of her fans were waiting to catch a glimpse of their favourite star.

As the fans welcomed the duo with a loud cheer, Varun addressed them saying, "it is overwhelming to come and see the responses from all you guys." He also shared that "Alia is visiting the theatre for the first time."

At the event, the fans demanded that Alia perform live on stage. So, Alia performed Kathak for her fans on the stage. Later, Varun also joined her and flaunted his dance moves.

After the event, they both entertained their fans outside the theatre. Varun and Alia stepped on the theatre's roof and wooed the crowd by grooving on their just launched song "First class".

The song also features Aditya Roy Kapur, Madhuri Dixit Nene and Kiara Advani. Composed by Pritam and written by Amitabh Bhattacharya, it is sung by Arijit Singh and Neeti Mohan.

KALANK is scheduled to release on April 17.

Twitter
Flip
Koo
Previous article
Pranutan talks about her journey of Notebook
Next article
AVENGERS: ENDGAME countdown: The role of Stan Lee?!
This May Also Interest You
News