Kangana Ranaut in a heated argument with journalist 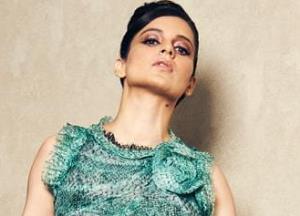 Actress Kangana Ranaut got into a heated argument with a wire service journalist at an event.

The incident happened while the actress was interacting with the media at the launch of the song, "Wakhra swag", from her forthcoming film JUDGEMENTAL HAI KYA on Sunday. Co-star Rajkummar Rao, producer Ekta Kapoor, writer Kanika Dhillon, choreographer Bosco Martis and director Prakash Kovelamudi were also present at the event.

Also Read: Kangana Ranaut: People should be ready to take dig at themselves

It started when Kangana Ranaut questioned the journalist over his negative comments on her last release, MANIKARNIKA: THE QUEEN OF JHANSI.

An ugly exchange followed, and things only got worse with others getting involved.

Ekta Kapoor and Rajkummar Rao were seen trying to intervene in order to control the situation.

Kangana Ranaut is among the few actresses in mainstream Bollywood who have made brave film choices, and when asked if she felt scared while choosing unorthodox roles because it might affect her stardom, she said: "I do not get scared as such but definitely as an actor, I always make sure that we will not hurt anyone's sentiment while making the film. I made a film called MANIKARNIKA and during the release of that film, there wasn't any controversies. No one took objection against that film because I am very considerate of everybody and their feelings."