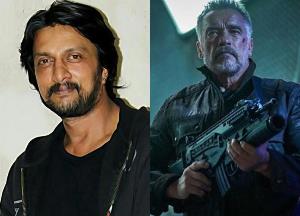 Actor Kiccha Sudeep feels Hollywood's Arnold Schwarzenegger is the "original action legend", saying he has grown up watching him on the big screen and hearing about his struggles and achievements.

"I have always been a huge fan of Arnold, he is the original action legend and we have all grown up to his iconic roles, hearing about his struggles and achievements, trying to copy him in some way and be as fit as him," Sudeep said.

Also Read: Arnold Schwarzenegger's Rules of Success helps an Indian to come out of depression

"It was a great honour to launch the trailer of hugely anticipated entertainer 'Terminator: Dark Fate' in my own language! I remember being absolutely blown away when I saw the first Terminator, Arnold was so menacing and deadly, and the action was unlike anything I had ever seen. His fitness videos are legendary," added the actor, who launched the film's Kannada trailer.

Cameron's "Terminator: Dark Fate" brings back Schwarzenegger as The Terminator and Linda Hamilton as an older Sarah Connor for yet another action-packed adventure.

Although "Terminator: Dark Fate" is the sixth instalment in the franchise, it is being touted as a direct sequel to 1991's "Terminator 2: Judgement Day". The film ignores the events of the three films that released in between. Directed by Tim Miller, "Terminator: Dark Fate" will release in India on November 1 in six languages: English, Hindi, Tamil, Telugu, Kannada and Malayalam.

Talking about the movie, Sudeep said: "Just seeing Arnold back in a Terminator film was enough! But this time around we will get to see action 10 times bigger than ever before; with a more menacing villain…what stood out to me in the trailer was the pumped up action sequences, which is a huge crowd pleaser here for our movie goers…in fact the scene where the Terminator splits into two was epic! Watching it in your own language (Kannada) for me was thrilling."