Mithali Raj, SRK & Nita look like a million dollars on this mag cover 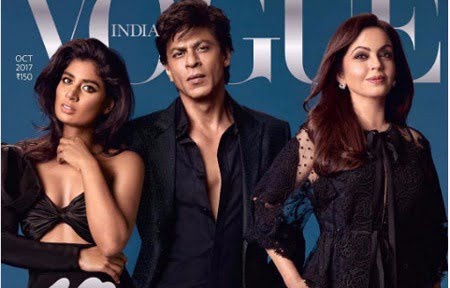 Yesterday we told you how Vogue India celebrated its 10th anniversary by hosting Women of the Year Award.

Interestingly Shah Rukh Khan too attended the awards to cheer for these women achievers while his friend filmmaker Karan Johar was the only person who bagged the ‘Vogue Man of the Year Award’ at this event.

On the cover Mithali looked extremely dazzling, while SRK is at his charming best. Nita Ambani looked confident and elegant.

Sharing the cover Sonam captioned it as, “A perfect 10! What achievers! It's a perfect ten! Mithali Raj (@mithaliraj) Shah Rukh Khan (@iamsrk) and Nita Ambani”

Twitter
Flip
Koo
Previous article
Confirmed: Tamannaah Bhatia to play Rani in Telugu remake of QUEEN
Next article
Vishal Bhardwaj collaborates with Junglee Pictures for his next
This May Also Interest You
News