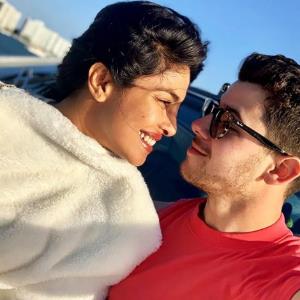 Actress Priyanka Chopra Jonas brought her husband and pop singer Nick Jonas and his family together to show some dance moves on popular track "Tareefan", picturised on Bollywood actresses, including Kareena Kapoor Khan. Priyanka is in Miami on vacation with Nick, his brothers Kevin and Joe and the latter's fiancee Sophie Turner. She is using the time off to introduce the world of Bollywood to her family. The actress shared a sneak peek from the vacation on her Instagram account.

On Tuesday, she posted a video with her family grooving to the tunes of Kareena and Sonam Kapoor Ahuja's popular track "Tareefan" from the hit movie VEERE DI WEDDING.

In the video, Priyanka can be seen saying "yeah Bebo (Kareena's nickname)". In fact, Nick was so impressed with the song, he commented: "My jam."

Earlier this year, Priyanka and Kareena appeared together in an episode of "Koffee With Karan".  Praising Priyanka's rise in the West, Kareena said: "I think what she (Priyanka) has done is amazing. It's a new fearless version of Priyanka that I see. I really credit her because I don't think I have that ambition and determination like hers."

Twitter
Flip
Koo
Previous article
Notebook is a free-spirited and unique love story!
Next article
We don’t need to protect children from everything’,says Juhi Chawla
This May Also Interest You
Technology

'For You' tab to stay on users' preferred timeline on Twitter

Fitbit back after brief outage