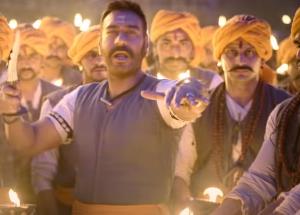 After a series of comedy films like Total Dhamaal and De De Pyaar De, Ajay Devgn is back again but not with a comedy film but a series of historic film Tanhaji The Unsung Warrior. The much-awaited trailer released today. This film also marks Ajay Devgn’s 100th film in the film industry.

Tanhaji The Unsung Warrior an epic historic film based on military warrior Tanaji Malusare in the Maratha Empire. He fought alongside Maratha leader  Shivaji Maharaj in various battles throughout the years.

The trailer shows Ajay Devgn fighting for Kondana fort. The battle was fought on 4th December 1670. It was fought between Tanaji Malusare, and Udaybhan who was a Mughal Army Chief. The surgical strike that shook the Mughal Empire.

Witness the epic battle between Mughals and Marathas.

The film marks the directorial debut of Om Raut The movie is slated to release on 10th January 2020.

Check out ‘Tanhaji: The Unsung Warrior’ trailer below: