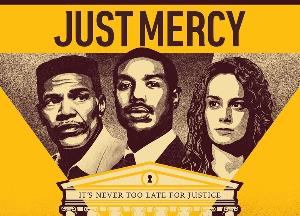 “Just Mercy” is a thought-provoking true story of a literal social-justice warrior, who highlights how corrupt the American system of jurisprudence is.

Set in Monroeville, Alabama, the real hometown of author Harper Lee who wrote, “To Kill A Mockingbird”, the narrative follows Bryan Stevenson (Michael B. Jordan), a young, optimistic, Harvard-educated lawyer, who in the late 1980s launched the Equal Justice Initiative in Montgomery, Alabama, to help the neediest and desperate cases.

His first client is Walter McMillian (Jamie Foxx), a black man who is on death row for a murder he says he did not commit, a contention backed up by ample evidence.

The injustice suffered by McMillian is unsurprisingly one of innumerable such cases, and systemic, and the film is at its best when angrily drawing attention to them. It is practically impossible for any liberal thinking viewer not to stew in rage as McMillian is stonewalled by a hyper-bureaucratic and thoroughly racist legal institution, and one where oppressing black people and other minorities is merely the norm.

The film’s opening moments hit the ground running and suggest it has no time to waste on racist cops or Defence Attorneys who are inexplicably more concerned about their conviction rate than with getting actual violent criminals off the street.

The setup might seem a flamboyantly energetic and successful, awards-courting legal drama. But, in actuality, the film soon slips into shop-worn, over-familiar genre tropes, and is trite with overly expository dialogues while conveying historical context and legal jargon. The first hour depicts the long slog of justice with flat, uninspiring scenarios, and mediocre visuals revealing anti-death penalty messages.

It is in the last act that the film begins to find a compelling rhythm. At this point the urgency of McMillian’s situation becomes deathly clear. The film is energised quite dramatically, especially with the arrival of Ralph Myers as an inmate who holds the winning piece of the defence’s puzzle.

What keeps you glued to the screen is Jordan’s warm and sensitive portrayal of Bryan Stevenson. He is a picture of reserved stoicism for most of the runtime, nevertheless he brings a dignified likeability to his character. In fact, your heart breaks for him and then rages with him, when he is being stripsearched before entering prison to visit his client.

Similarly, Jamie Foxx commands the screen whenever he is on it. He shoulders the crush of unfairness with a posture that might feel regal if it weren’t also inescapable.

Brie Larson as Stevenson’s co-worker Eva Ansley is equally competent, as she breathes life into an unfortunately, underwritten character.

Rafe Spall as the public prosecutor Tommy Chapman and Tim Blake Nelson as Ralph Myers, first resemble caricature of a racist and conservative society, but with their nuanced performances they make their characters humane and memorable.

The others in smaller roles who leave an indelible mark are Rob Morgan as Herbert Richardson, an older inmate whose execution date looms near, and O’Shea Jackson Jr as McMillian’s other cell neighbour Anthony Ray Hinton.

Mounted with moderate production values, the film’s finale takes place in a manicured court-room. Here Stevenson’s speech, pre-packaged with American idealism, robs the film of its sting, but nevertheless it opens your eyes to the fact that America is no different from most countries across the globe.