MARY POPPINS RETURNS to arrive in India on this date 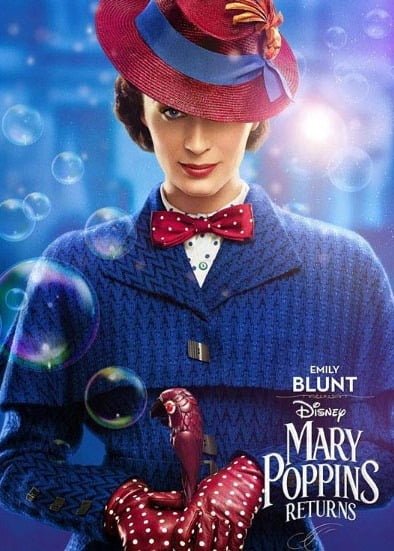 Emily Blunt's MARY POPPINS RETURNS will release in India on January 4 next year.

The release date was announced on Friday via a statement.

Disney's MARY POPPINS RETURNS stars Blunt as the practically-perfect nanny with unique magical skills who can turn an ordinary task into a fantastic adventure.

In this all new original musical and sequel, Mary Poppins is back to help the next generation of the Banks family find the joy missing in their lives following a personal loss.

The enigmatic nanny is joined by her friend Jack, played by Lin-Manuel Miranda.

Rob Marshall has directed the film from a screenplay by David Magee. The screen story is by Magee, Marshall and John DeLuca based upon the Mary Poppins Stories by PL Travers.

"I was incredibly honoured to be approached by Disney about directing a sequel," said director-producer Marshall.

"This is a brand new original film musical from top to bottom, which is very rare, and it is a wonderful opportunity to create something specifically for the screen," he added.

PL Travers first introduced the world to the no-nonsense nanny in her 1934 children's book "Mary Poppins".

The film takes place in the 1930s Depression-era London 24 years after the first film was set. Michael Banks works for the same financial institution that employed his father and still lives at 17 Cherry Tree Lane with his three children, Annabel, John and Georgie and their housekeeper Ellen. When the family suffers a personal loss, Mary Poppins magically re-enters their lives and
with Jack's help, brings joy and wonder back into their home.

"MARY POPPINS was the first film I saw as a child and it opened my mind up to movies and to the love of musicals and adventure and fantasy in film," said Marshall, adding: "This film isn't just for children… It's for the child in all of us."