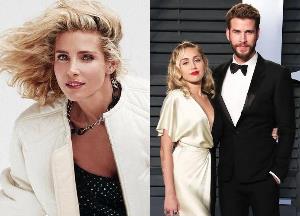 Chris Hemsworth's wife Elsa Pataky has shared her thoughts about her brother-in-law Liam Hemsworth‘s marriage with Miley Cyrus which ended in less than a year.

Everyone was shocked when Cyrus was spotted making out with Brody Jenner’s ex Kaityln Carter, right after the announcement the singer’s split from Hemsworth. Pataky, who is married to the 'Thor' star Chris Hemsworth, opened up about the breakup.

"My brother-in-law, well… After a relationship that you’ve dedicated ten years to, he’s a little bit down, but he’s coping well," the actress shared. "He’s a strong boy and he deserves the best, I think he deserves much better."

"You always find support in your family, and he's joined at the hip with his brother, who has been there to give all the strength he needed," she continued.

Hemsworth and Cyrus were romantically involved since early 2009. They met on the set of 'The Last Song' and dated each other on-and-off for three years. They announced their engagement back in 2012, before calling it off the next year.

In Oct 2016, Cyrus confirmed that they got re-engaged. The couple got married on 23 December 2018 at their home in Nashville, Tennessee.