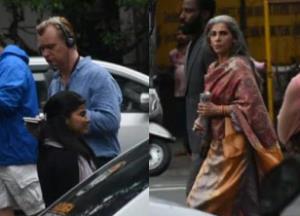 The team was spotted shooting for the project at the Gateway of India on Monday. Nolan was joined by Dimple and Pattinson. They also shot at Colaba Causeway, Royal Bombay Yacht Club and on the streets near the famous Taj Mahal Hotel.

Several pictures from the shoot have gone viral on the Internet. In one image, Nolan is seen wearing a garland, and is busy guiding his team. In another, he is seen on a ferry wearing an orange life-jacket, and in one he is seen cranking the camera while an assistant follows him with a large umbrella.

Pattinson is seen in a crisp formal shirt, beige suit and sunglasses. In one image, he is engrossed in a conversation with someone from the team on the set. Dimple is seen getting ready for the shot with large clips on her hair. She wore a salwar suit and a red shawl.

The cast and crew will shoot for the film in Mumbai for 10 days. They will film action sequences in countries including Italy, UK and Estonia. "Tenet" is slated to release in 2020.