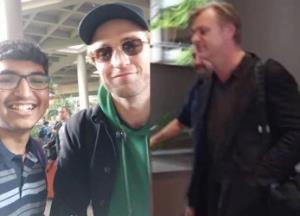 The Oscar-winning filmmaker Nolan and "Twilight" hero Pattinson, along with the film's cast and crew, arrived in Mumbai early on Friday for a schedule of 10 days.

The film's team is stationed in the south Mumbai for the shoot. They will film crucial action sequences in India.

Nolan has planned to shoot the film in seven countries including Italy, UK, Estonia apart from India.

An interesting casting in the film is Dimple. She grabbed a lot of attention on social media when she was spotted in the city flaunting her new hair colour, reportedly for her role, which gave the 61-year-old actress an ultra-glam appeal.

Mumbai-based talent manager Purvi Lavingia Vats, who had pitched the idea of casting Dimple to Nolan's team, had told IANS: "Dimple is a great actress and a wonderful person. She is the only Indian actor to be a part of this project as of now. They will be shooting the film in different countries, and India is one of them."

Back then, when asked if he watched Indian films, Nolan had replied: "I have watched some Indian cinema, not enough though. But I enjoyed them very much. I want to watch more of them."

Covid cases in India could be 17 times more: Study