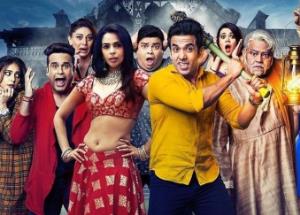 ALT Balaji set to spook and tickle the funny bone of their audiences with all new Horror Comedy, “Boo…Sabki Phategi.” Tusshar Kapoor & Mallika Sherawat make their digital debut. The Web Series is based on a group of friends who plan to spend the night at a haunted resort managed by blind caretaker. The Group ignores all the paranormal activities taking place in the resort.

In the series of events, members of the group start turning up dead, one after another and turn into zombies. Manav played by Tusshar Kapoor, plays the most innocent guy in the group, who is the butt of all jokes. As one of his lines from the trailer says .”Yeh Ladkiyon ki Ekta inhe kya Shobha deti hai.”. While Mallika Sherawat plays the mysterious walking ghost who tries to communicate with the group.

Tusshar said, ‘This is my digital debut and I am really excited to associate with Farhad Samji who has been my writer for the ‘Golmaal’ series. My character is quite young and has lot of fun elements. I am working with Balaji Telefilms and my sister Ekta after five years and it’s a wonderful feeling to work with them again.

Mallika said, “I’m excited to be back in India and this time for my debut web-series. ALT Balaji is India’s leading and most loved OTT platform and couldn’t have asked for better digital debut. I play a ghost for the first time and the makes have kept me look very interesting.