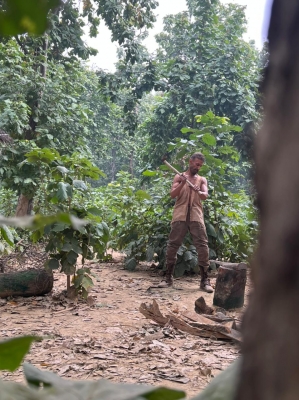 Rahul Dev’s look from the upcoming season of the crime-thriller web series ‘Abhay’, was revealed on Saturday.

The exclusive pictures of the actor from the show, present him against the raw locales of the forests with a bold and brave appearance.

The actor will be seen playing the antagonist in the series directed by Ken Ghosh. With Kunal Kemmu in the current season’s lead role, the series has received a lot of positive response.

Talking about the third season of the popular web series, Rahul said, “I am excited to be a part of ‘Abhay 3’ and to be working alongside Ken and Kunal. This series has set a benchmark and I am confident that season 3 will take things up further as it is very different than anything seen before.”

Speaking carefully as to not give away any spoilers, the actor further said, “At this stage reveal much except that the character is a man of a few words. ‘Abhay’ has a very successful franchise with a loyal fan following. Hence, I am happy to be a part of this unconventional series and the ZEE5 family.”

Lauding the show’s director, he added, “I have enjoyed shooting with Ken, he’s a director with a great visual sense and a crackling sense of humor. I am happy to collaborate on this successful series and await the audience’s response to it.”