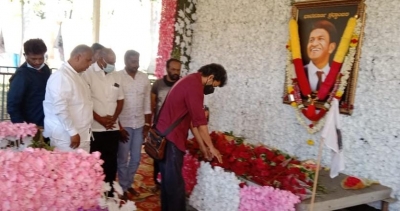 Tamil actor Vijay, fondly referred to as ‘Thalapathy’ by his fans, on Saturday paid homage to late Kannada actor Puneeth Rajkumar at his memorial in Bangalore.

Video clips of the actor paying homage to the Kannada superstar began doing the rounds on social media on Saturday.

In one of the clips, Vijay is seen wearing a mask and awaiting his turn to pay homage to the late actor. The Tamil star then goes on to place a garland at the memorial and then performs a ‘harathi’ before paying his respects.

Actor Puneeth, one of the top actors of the Kannada film industry, passed away on October 21, last year, after suffering a cardiac arrest. Puneeth, who enjoys a huge fan base, holds the distinction of being the first Indian actor whose first six films completed a 100-day run in theatres.