After Texas showing, Lahiri in with a chance for Tokyo spot 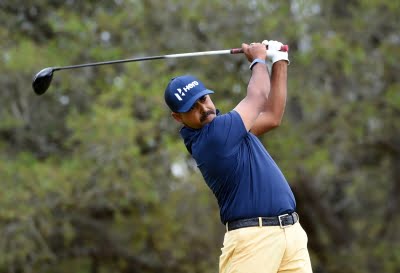 New Delhi, April 7 (IANS) Top Indian golfer Anriban Lahiri has a chance of making it to the Tokyo Olympics after his top-five finish in the Valero Texas Open, a US PGA Tour event, in San Antonio last week.

While his fine show has made him richer by Rs 2.3 crore, it has also helped him jump 159 places on the Official World Golf Ranking (OWGR) list and pitchforked him to 319th from 478th. Another couple of good finishes in the upcoming PGA Tour events will give his rankings a further boost before the window for making the Olympic cut shuts on June 21.

A total of 60 golfers based on their OWGR can compete in the Olympics and no country can send more than two entries in the quadrennial games. As of date, Udayan Mane is the highest-ranked Indian at 287th, and is placed 60th and last on the Tokyo Olympic Games Reallocation Reserves List, while Lahiri, after his fifth-place finish in the Valero Texas Open, is a ‘Replacement’ contender on the Reserves List.

A couple of good finishes for Lahiri on the PGA Tour and he would certainly make the Olympic grade. Mane, on the other hand, has been hit hard because of the cancellation of domestic and Asian Tour events due to the Covid-19 pandemic, not being able to give his OWGR a boost.

Another Indian, Gaganjeet Bhullar, is six places behind Lahiri at 325 and is also a ‘Replacement’ contender on the Tokyo Reserves List.

With his coach, Vijay Divecha, scheduled to visit Lahiri in the US soon, the Indian ace can look forward to a much-improved show on the PGA Tour and perhaps a big jump in rankings.

“I need to clean up on some of the areas like chipping and bunker play, which has been my strength. I’ll go back to the drawing board and spend time getting more confidence in those areas and also in my mid-range and short-range putts. I’ve done well outside of 15 feet but not done well inside of 12 feet. Those are the areas that I’ll be working on and hopefully get better in time to come,” Lahiri had said after his fifth-place finish in Texas.