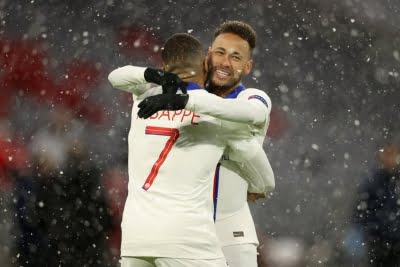 Berlin, April 8 (IANS) Title holders Bayern Munich are on the verge of elimination from the Champions League after Kylian Mbappe’s double gave Paris Saint-Germain a thrilling 3-2 victory in the first leg of their quarter-final.

Mbappe struck the opener and the winner on counter-attacks against a woeful Bayern defence and PSG captain Marquinhos made it 2-0 midway through the first half, DPA news reports.

Bayern carved out plenty chances but were profligate without injured star Robert Lewandowski.

His deputy Eric Maxim Choupo-Moting cut the deficit with a header and Thomas Mueller levelled but Bayern’s weakness at either end has left them with an uphill task going into next week’s return in Paris.

Lewandowski will not be available for that game as he recovers from a knee injury. PSG will hope to finish the job for an element of revenge after losing to Bayern in the fina of last year’s tournament.

A brilliant goal from Mason Mount and another from Ben Chilwell gave Chelsea a 2-0 win ‘away’ to Porto in a game which was played in Sevilla due to coronavirus restrictions. The same venue will host the return leg as well.

Bayern kept the same team which beat RB Leipzig in a crucial Bundesliga clash at the weekend but were exposed immediately in the Munich snow.

A lovely pass from Angel Di Maria found Neymar in space and he in turn fed Mbappe who lashed a third minute opener through Manuel Neuer.

Choupo-Moting had already headed onto the bar, the first of some 31 Bayern shots on the night, but the hosts found themselves two down when Marquinhos beat the offside trap to convert Neymar’s swinging cross in the 28th minute.

Without world player of the year Lewandowski, Bayern found themselves frustrated by visiting keeper Keylor Navas but Choupo-Moting – who came off the bench for PSG in the final last season – gave them hope with a downward header before the break.

“We have to score more goals,” Mueller told Sky TV. “That’s how it is now, we have to chase after the deficit.”

The pressure mounted and Mueller headed an equalizer from a free kick but Bayern, despite bringing on Alphonso Davies and Jerome Boateng to rework the defence when Leon Goretkza and Niklas Suele picked up injuries, had not learnt their lesson.

Mbappe was given time with Boateng, who will leave the club after 10 years this summer, standing off him and the French international found the 68th minute winner at the near post.

“We had a lot of hard work to do because the way they play is dangerous, with or without Lewandowski,” said PSG’s German midfielder Julian Draxler, who added Mbappe “has quality like no-one else in the world.

“We need his speed. At the moment, he has chances and he scores. That’s really important for us, especially against this Bayern side.”

Thomas Tuchel coached PSG last season but now manages Chelsea after being sacked by the Lique 1 side at Christmas and he is also on course for a return to the semi-finals.

Mount spun away from his marker and found the bottom corner in the 32nd minute to give Chelsea a lead against the run of play.

“It was about time it came,” England’s Mount told BT Sport of his first Champions League goal.

“I’m always working on my finishing, it’s a part of my game I can improve on.”

Porto faded as the game went on and Chilwell rounded keeper Agustin Marchesin for a late second shortly after Christian Pulisic thumped the bar.

The victory eased Chelsea’s concerns after a spectacular 5-2 home defeat by Premier League strugglers West Brom at the weekend.