Have to cash in on opportunities to play matches: Manpreet 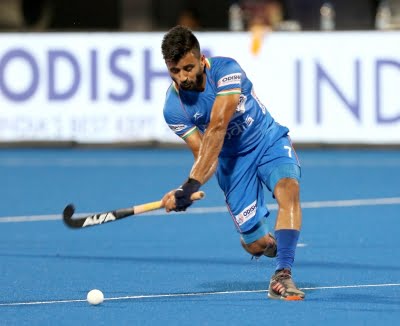 Buenos Aires, April 9 (IANS) India men’s hockey captain Manpreet Singh said that the team has to cash in on whatever opportunities they get to play top quality opposition considering they missed match practice for much of last year.

India played two practice matches against Argentina in Buenos Aires this month and will be facing the Olympic champions in the FIH Pro League on April 10 and 11. “Both practice matches were good. They were hard-fought games and quite intense,” Manpreet said.

“Having missed match practice for much of last year, we have to cash in on the opportunities we get. It is good for us that we are tested against a tough opponent like Olympic Champions Argentina. In both games, we showed a lot of fight and created loads of chances. But we could have scored even more whilst conceding fewer goals. We are working hard to be more compact at the back and being more ruthless going forward,” the 28-year-old Manpreet added.

India won the first practice match 4-3 and were held to a 4-4 draw in the second game.

“We worked hard in our training camps and tried our best to recreate the intensity of a high-stakes international match. That is why the upcoming matches are so important to us. One of the areas we really focussed on during our national camp in SAI, Bengaluru, was to make more circle entries and finish chances. Converting Penalty Corner opportunities is another aspect we wanted to get better at,” said Manpreet.

At 2 am while feeding my infant, I received notification: Sacked Google worker

Was confident that if I managed to stay till the end, could win the game in last over: Suryakumar Yadav

Winning the inaugural World Cup with name of India written in golden letters is a big deal: Anjum Chopra