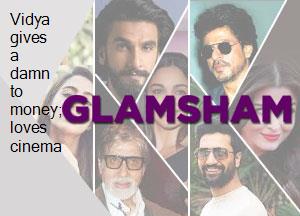 Who wouldn't love to take away a heavy paycheque? Where Katrinas, Kareenas, Aishwaryas, etc charge a whopping amount and constantly strive to be the highest paid actor in the industry, here's an actress for whom work is of much more importance than money. Well we are talking about the current hot favourite actress of B-town, Vidya Balan. Despite giving back-to-back successes like PAA, ISHQIYA, NO ONE KILLED JESSICA and THE DIRTY PICTURE, Vidya has not hiked her fees. Surprising as it may sound Vidya, who is considered as the most bankable and reliable female star, has not asked for a surge in her pay.

hen asked to Vidya, the modest actor smilingly said, ''I take that as compliment. We all have a distinct and unique space in the industry. I have never thought about just money. For me it's beyond that. The kind of adulation I receive for my films is much more important than money.''

''Having said that money is more than welcome, more the merrier,'' chuckles Vidya.

Now that her career is going great guns everyone's eager to know about Vidya's marriage plans. However, it seems Vidya wants to carry the hangover of success and is in no mood to settle down.

''My career is really doing well. Emotionally, Mentally I am into a very happy space by God's grace. I am not thinking of marriage as of now. I do believe in institution of marriage but right now I don't want think about marriage,'' says Vidya

Meanwhile Vidya is gearing up for her upcoming release KAHAANI, whose first theatrical trailer was launched recently.