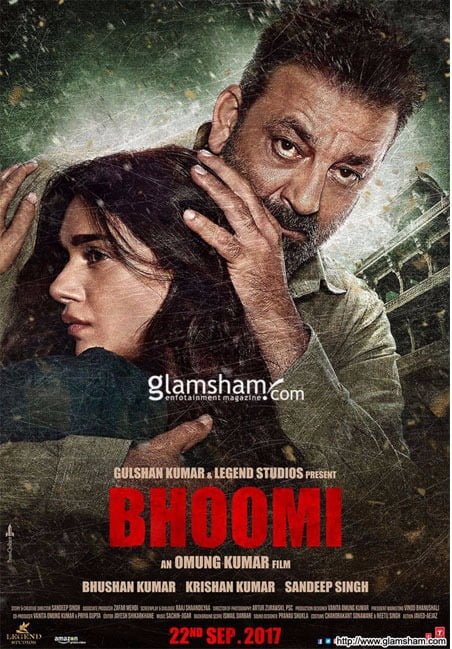 Director of successful biopics like MARY KOM and SARBJIT, Omung Kumar's next, BHOOMI co-produced by audio and movie giants T-Series head honcho, Bhushan Kumar, does promise good, situational music, in keeping with the script. It also gives composers Sachin-Jigar a chance to redeem themselves after a disappointing show in A GENTLEMAN.

Just the first song on the playlist and one is certain that Sachin-Jigar are in form! Yes, the Rahat Fateh Ali Khan rendered 'Lag Ja Lage' is supremely sublime, thanks to a lovely rendition by Rahat, superb fresh tune with soothing sufi inspired backdrop (the background chorals and Hindustani-Western arrangements are delightful) and some nice lyrics (Priya). The song is almost in the same league as Rahat's DABANGG romantic numbers.

Sunny Leone is surely in demand and after a super hit item number, 'More Piya' (BAADSHAHO), it appears that she has another chartbuster to her credit with a dance bar number, 'Trippy Trippy', a song that is an ode to an alcoholic! A really rhythmic superb number with a fresh tune, the song is well rendered by Neha Kakkar with Benny Dayal, Brijesh Sandilya giving support and Badshah chipping in with his own rap.

Sachin Sanghvi showcases his vocal prowess through a lovely ghazal like composition, 'Kho Diya Hai', and despite a slow drawl tune, it never loses its hold on listeners due to some nice singing, lovely arrangements ('tabla', flute and guitars predominantly) and background chorals.

'Will You Marry Me' is a nice, interesting chhed-chhad propositioning wedding number which is rendered well by Jonita Gandhi and Divya Kumar. Anvita Dutt comes up with some humorous and novel lyrics which fits the situation.

'Daag' can be classified as the theme song of the film. A hard hitting situational number that encapsulates the spirit of the movie, and is sung with emotions by Sukhwinder. Priya Sariaya comes up with apt lyrics tailored to fit the situation.

The devotional 'aarti', 'Jai Mata Di', is rendered with zest and enthu by Ajay Gogavle with Sanjay Dutt commencing the number with a famous Shlok (Sanskrit holy verses). The inspirational number urges the lead to be fearless in his fight against injustice as he seeks Mata's blessings in his tough endeavour.

There is also a Ganesh Aarti that has been rendered by Sanjay Dutt himself and which forms part of a scene in the movie where the actor is performing an aarti.

Summing up, all credit to Sachin-Jigar for coming up with a good musical score, which is almost comparable to their (by now) iconic BADLAPUR album. The compositions fit the script yet they have a mass-plus-class appeal. Our picks are 'Lag Ja Gale', 'Trippy Trippy' and 'Will You Marry Me'. Quite like BADLAPUR, the songs will surely gain more popularity after the release of the film on 22nd September.

Twitter
Flip
Koo
Previous article
Gangster ‘Baba’ gets his mama, papa
Next article
Kirti Kulhari: Would love to play Tyrion Lannister’s role in Game of Thrones
This May Also Interest You
News